From Misery To Miami…. 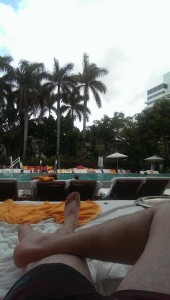 There I was surrounded by all the beautiful people, in the most amazing surroundings, tropical weather and having a not-too-hideous waitress bring me double Johnny Walkers seemingly every 45 mins.

Safe to say, was a little bit surreal.

If I scroll waaaaaaaaay back to my younger years, I was a quiet, shy, dorky little kid with braces (top and bottom – hell YEAH sexy boy…) who was on the path to being an engineer.

Now, I travel the world, work with some the most inspiring group of entrepreneurs, personally coach over 30 people to achieve glory and lead a group of nearly 700 fruitcakes in Coffee With Dan

How did it all happen?

Well, I have mentioned before that I had (since a young man) been told I would do great things. I had a natural gift with people – i truly love meeting new folks and understanding what makes them tick – and i seemed to be able to sell without selling.

Been asked more than once to write down what my ‘secret’ was and I have to say I don’t know – I just do what I do! 🙂

But this transformation has only really happened since Christmas of 2013, and if I am being REALLY honest its probably been since the start of 2015 when I really kicked it up a notch.

Tell a lie, i fucking broke myself getting to where I am.

Thats the thing, everyone wants a magic pill or shortcut and when I look back and am asked to tell peeps what that was – its fucking hard work. I remember Living out of my trusty Porter 46 bag (which I have a borderline obsession with. I think I love a bag) for 27 days.

I did 11 states, had over 40 meetings, attended 2 masterminds, one massive event (T&C) and met each and every one of my clients.

To say it was exhausting was an understatement,

Criss-crossing the States, with absolutely NO logical order to my travels (seriously I probably fucked myself up more so by having no idea which states was where ha). That, and once day I was in the glorious coastal sunshine of San Deigo having beach meetings, and then the next day Im up to my knees in snow firing all the guns

I know it sounds like fun – and yes of course it was at points – but I believe good things come after a period of intense effort. The fact that my body when I returned home was totally fucked means I left everything ‘on the table’

Good shit does come to good people – but I think there some folks have forgotten what it means to REALLY ‘do the work’. I was (and still am) prepared to make sacrifices to ensure that mine and my families future is secure.

There is no one else

So yeah, there is a fair dose of ‘misery’ in my life. Might not sound like it but being on your own, non-stop on the go, it gets lonely.

But you know what, as I look back on the week I had in Miami, the fact that I was able to help the folks financially in the move, I have a truly amazing coaching group (who are actually improving at a stupid fast rate), that I can help out good people who just need a little bit of a hand?

So, not really a point per se to this blog, and reading it back I admit I went on a bit of a ramble on this one ha

So have decided to put a few key ‘takeaway’ points for you:

– hard work is necessary, There are no shortcuts
– its never to late to change your life, IF you want it bad enough
– you are going to need to make some sacrifices if you want to level up your life
– Miami is a silly, silly place

3 comments on “From Misery To Miami….”